Thinking about politics and fallen soldiers

We wish this item had come to our attention earlier this week when interviewing State Treasurer John Kennedy...

From Political Wire via The Dead Pelican:
Without fanfare or national media attention, White House strategist Karl Rove went to Louisiana the weekend before last to woo State Treasurer John Kennedy (D) to the GOP and into the 2008 Senate race against Sen. Mary Landrieu (D-LA).
============================================
As Memorial Day approaches our area is poised to acknowledge the huge sacrifice soldiers make to keep the push going against people who hate the American way of life.
Conservatives link our struggles to the war on terror. Liberal thinkers want communication not war.
We have interviewed countless soldiers in our exclusive coverage of Fort Polk. No other local media has made the effort to cover the post more than KALB-TV. Just ask John-Thomas Kobos what the experience has meant to him and the feedback he gets. 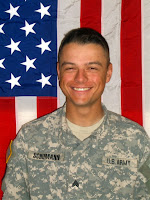 Today, John-Thomas attends another soldier memorial for Sergeant Jason Alan Schumann, 23, of Hawley, Minnesota. He died Saturday,May 19, near Ad Diwaniyah, Iraq. Schumann died of wounds sustained when an improvised explosive device detonated near his vehicle. Schumann was a Cavalry Scout assigned to Apache Troop, 3rd Squadron,89th Cavalry Regiment, 4th Brigade Combat Team, 10th Mountain Infantry Division.
Schumann joined the Army in Sept. 2001 and arrived at Fort Polk in Oct. 2004.
He may not have been from central Louisiana, but he lived with us since 2004. Is it too much to ask for everyone today to bow your head and say a silent prayer for these soldiers?
Posted by blogger at 8:21 AM

God Bless Sgt. Schumann. He looks like an average joe but he gave his life for us. Thanks for showing his picture Michelle.