The call came into the News Channel 5 studios today at about 2:00pm. It was a family member of Sgt. Timothy Bruce Cole. They wanted to know why we had not reported on the death of Cole who was 28 and from Oakdale. We explained the Department of Defense, in our experience, runs about three days behind the date of death because there are important policies regarding notification of next of kin for a fallen soldier.

The call was agonizing to take because the pain of the loss was so raw.

John-Thomas Kobos visited Oakdale today and has this report. We're told Timothy Bruce Cole was a career soldier. He graduated from Oakdale High School and went into the Marines. He loved being a solider and transferred to the 82nd Airborne Army. He was scheduled to return from Iraq in August but his service there was extended to November. He was to transfer from Ft. Bragg to Ft. Polk then.

We will continue to follow this important story and offer this link to the latest data on soldiers killed in Iraq.

The war continues to strike families all over America now one of our own in Oakdale.
Posted by blogger at 5:51 PM No comments:

Hines vs. Kennedy - Kennedy wins one?

You may recall Kennedy when in Alexandria recently talked about the issue with us in the KALB-TV Video Blog. Saying Hines was angry with him over the failed Bunkie Sugar Mill deal. This issue has been a favorite of Chad Rogers of The Dead Pelican. And the Video Blog we did with Kennedy has had plenty of hits with people looking for his side of the issue.

What is interesting in the Advocate article is the partial quote attributed to Senator Hines
"Hines said he was taking the step in response to senators’ reluctance to embrace the idea because of “news media and conservative talk radio” questioning “of the motivation of this bill.”Hines said the executive committee that he proposed is needed because of “the arrogant and arbitrary manner,” in which Kennedy decides what the bond commission should hear.
Kennedy’s approach is “not in the best interest of the people of this state,” he said."

To Blog or not to Blog - that is the question

Several of you have emailed recently asking what is going on with this blog and the comment section. Comments are now allowed only from "team members" which signaled to some of you the listening had stopped.

The cenlamedia blog will continue to be used as another way for us to make contact with the blogosphere, but it will move into the kalb.com fold soon.
As some of you know, on kalb.com we have a Video Blog section which has been a destination for newsmakers in our state. The video blog and cenlamedia are a part of a project by Media General to reach out to web users and find ways to communicate.

It has at times been a slugfest but for the most part very helpful in engaging a group of people who are unhappy with the staus quo in the central Louisiana media.
There is however, one new requirement. You must be willing to have a verifiable email to become a part of the discussion. We do not have to know who you are, just that you are willing to at least identify a part of your existence online.

That way we can begin to form a community advisory group online that has a say in what is local news. Keep it clean, focused and away from silly personal attacks and online you go.
Kalb.com now ranks among one of the top 25 website in the Media General system for unique visitors and you can become a part of that online community if you are willing to adhere to some basic rules.

Here's to the sharing of valuable information online!
Posted by blogger at 8:45 AM No comments:

These are courtesy of a newsletter by the Poynter Institute.
Cool Sites
Tech reporter Bob Bicknell at KYW Newsradio 1060 in Philadelphia posts a nice collection of cool, unusual and useful Web sites you may have never heard of. Among them:
TechPresident.com -- One of the many sites following the candidates on their marath 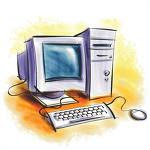 on journey toward the primaries and the White House is TechPresident.com.
Most interesting here is how the site tracks the candidates' MySpace.com pages and the number of viewings they get on YouTube.com.
ClinicalTrials.gov -- For anyone who's been diagnosed with any disease or disorder, the promise of a clinical trial offers the hope of a new and perhaps better treatment. That's where this site comes in.
ClinicalTrials.gov is run by the National Institutes of Health and can link you to help that you might not otherwise get.
DoMyStuff.com -- This site promises to help you "outsource your life." Here's where you can put your chores and errands up for bidding. Others can then browse the job, see what you're willing to pay for it, and "bid" on their own to take that job.
Posted by blogger at 8:30 AM No comments:

Again from the AP:
Officials comment on Jefferson's indictment
Some responses from Louisiana officials on the indictment of U.S. Rep. William Jefferson:
"Congressman William Jefferson has always been a strong advocate for the people of Louisiana and has during his tenure in Congress made good votes and done great things to further the progress of the state.
"As far as Congressman Jefferson's legal issues, we will not
attempt to analyze the federal indictment nor interpret the law. An indictment is not an admission of guilt - we will leave that decision to the courts."
- Chris Whittington, Louisiana Democratic Party chairman

"These are serious allegations and must be considered promptly and thoroughly by our justice system. Every American is considered innocent until proven guilty, and our Constitution provides an opportunity for both sides to present their case.
"Such serious charges against a public official are troubling in any circumstance. But having this cloud hang over our state's efforts to recover and rebuild is particularly so, and I hope the matter will be brought to a swift and just resolution."
- U.S. Sen. Mary Landrieu, D-La.

"It is unfortunate that the dark cloud surrounding Congressman Jefferson and his service to the 2nd congressional district continues to blanket our people while we are still struggling to recover.
"Despite these latest headlines, we cannot lose focus on the needs of tens of thousands here in this city that are still working to repair their homes and lives. This is a sad day for New Orleans from any vantage point."
- State Rep. Karen Carter, D-La., who unsuccessfully challenged Jefferson's re-election to Congress last year.
Posted by blogger at 9:51 PM No comments:

“The charges in the indictment against Congressman Jefferson are extremely serious. While Mr. Jefferson, just as any other citizen, must be considered innocent until proven guilty, if these charges are proven true, they constitute an egregious and unacceptable abuse of public trust and power.
“As we have demonstrated in implementing tough ethics reforms and passing tough lobbying reforms already this year, Democrats are committed to upholding a high ethical standard and eliminating corruption and unethical behavior from the Congress.”
Posted by blogger at 8:18 PM No comments:

In case you missed the live news conference on CNN click here for an example from the US Attorneys office of what they say Congressman Jefferson did. Also included in this link the full pdf file with the 94 page indictment.
Posted by blogger at 3:49 PM No comments:

"U-S Representative William Jefferson of New
Orleans was indicted today on federal charges of racketeering,
soliciting bribes and money-laundering in a long-running bribery
investigation into business deals he tried to broker in Africa.
The indictment handed up in federal court in Alexandria,
Virginia, is more than an inch thick and list 16 alleged violations
of federal law that could keep Jefferson in prison for up to 200
years."

Alexandria Police Chief Daren Coutee is on record trying to revive the community policing idea in the city of Alexandria.

From Wikipedia we learn this about community policing..."Community policing is a political philosophy in which the police and police department are seen as members of the community, with police officers being part of where they live and work. Cities and counties that subscribe to this philosophy tend to do much more community work than traditional police departments. This often includes having more police officers who "walk the beat" as opposed to driving around in police cars. The basic idea is to create bonds of trust and reliance between police and the public."

Zone 4 commonly known as the Sonja Quarters has been the home of a program Coutee calls "Weed and Seed". Mid January KALB-TV Reporter Joel Massey spoke with Pastor Floyd Kirts about the Weed and Seed program in his community. He said the crime situation was getting better and he told Joel it had improved was because of the increase in police presence.

Coutee said in January "we weed out the bad, re-institute order in the community and then the seed portion is done by the residents to refurbish, rebuild and re-institute pride … It does work. If the people in the area want to become involved."

Kirts gave his take as well by saying it took more than just the police "Pastors, preachers, grandparents, mothers, it's everybody. The old cliche says it takes a village to raise a child. So I'm hoping that everybody in this area will come together and say let's do it together."

Six months later the Chief is still taking steps to add police to his staff and is points toward community policing as a way to combat crime.

But will it work?
Posted by blogger at 10:08 AM No comments: