The story of Staff Sergent Timothy Bruce Cole was first blogged about here.

And since then the painful experience of bringing his body home is what the friends and family members have had to go through.

Today his mother Connie reached out to us and I wanted to take a moment to share her email. 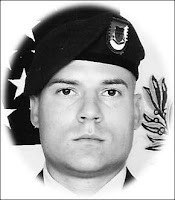 In case you wonder why you have not seen the family interviewed in television it is a commitment of ours only to interview the families of the dead (whether it is from a crime, natural causes or in this case war) if they come to us. Do we get beaten by fellow journalists? All of the time. It is possible to take this approach in a more competitive environment? Probably not, but we put ourselves in the families place and waiting for them to come to us is the right thing to do. It's just that simple.

Here is the email with the author identifying herself as Connie Cole in her own words...

"I'm Timothy's mother. I wanted to let you know that I thought the coverage you did on Timothy was great. Since you were the first to run an article, I thought you would want to be the last. We've been informed that the small town of Elizabeth will be lining the streets today for his ride through town to his last resting place. The town of Oakdale did the same thing when we brought Timothy home on Wednesday. It touched my heart and brought me to tears to see so many people honoring my son for giving the ultimate price for his country, family, and friends. People crowded the boulevards and sidewalks holding flags, candles, pictures of him, and posters welcoming him home. Enlarged pictures of Timothy were posted down the boulevard. The fire department was blowing their sirens. Ten police cars with blue lights were at the head of us along with four motorcycle police ahead of them. People would stop their cars and exit to salute or hold their hands across their hearts when my son passed by. The patriotism shown still brings me to tears. It was wonderful to know that he wasn't forgotten. I and the rest of the family will miss his wit and laughter tremendously. We've received so many cards and notes from people expressing their condolences. Everyone has been so nice and the military has done so much to ensure that his last few days on earth are with honor. They posted two soldiers on either side of his casket since he arrived. They change every 15 minutes. Congressman Rodney Alexander has assisted us and sent someone to our house to express his deepest regrets. He is in Washington this week. I can never say enough to the people of Oakdale and surrounding towns for their support. The town of Forest Hill placed flags along Hwy 165 and the flag flew at half mast at the post office. Today, there are supposed to be four motorcycle clubs escorting Timothy to his services. One is the Leathernecks and the other the Patriot Ride rs. The other two I don't know. The cousin of my daughter-! in-law who is a Marine was flown to Delaware to escort my son home along with a soldier from the Army. A close friend of Timothy's said that if Timothy had to go, he would have wanted to go this way. He would have wanted a 24 karat casket with pearl handles and Mardi Gras beads hanging out. I know if Timothy is looking down, he would be so very pleased by everything that has been done in his honor. People ask what they can do for us, but the fact is that just asking and sharing our grief is more than enough. Again, thanks for your coverage."

"Good Morning Mrs. Cole,I know this day could be the hardest of your life and my heart aces for you and your family. We appreciate you reaching out to us so much. We have assigned Diana Iles and excellent reporter to cover Timothy's funeral today and thank you for this information.I have been emailed by a member of your family looking for copies of the coverage and want to let you know personally I will make dubs for you. This is the least we can do for you and your family. I had planned to attend Timothy's funeral today but may not be able to. Please know I will bow my head and say a prayer for your beloved son and thank him for the incredible sacrifice he has given to keep my children safe from harm. God bless you all."

Please join me right now after you read this and take a moment of silence to send strength to the Cole Family.
Posted by blogger at 1:47 PM

SSG Cole, You will never be forgotten. You will always remain in my heart. SGT Mallari, 5-73RD CAV Medic.

Tim was actually a good friend of mine that myself, Nelson Hammer and Shaun Rostek came up with. We were stationed in Okinawa as well as our MOS schools. We miss him greatly..He was a great friend. I am currently serving in Iraq and keep a piece of him while I am here.